The Women Presidents’ Organization (WPO) is the ultimate affiliation for successful women entrepreneurs worldwide. There are currently 137 chapters worldwide. Each chapter of 20, serves as a peer advisory group based on the four C’s of the WPO: Collaboration, Confidentiality, Commitment and Connections.

Embracing their WPO mantra of “Reaching Farther. Together” , the WPO’s campaign has had a significantl impact on the project, has supported Overberg conservation and actively invested in the tomorrow of this pristine region.

This is how the WPO communicated the importance of reforestation through their campaign  :

Trees restore ecologies. Careful and well planned re-establishment of indigenous trees results in sustainable conservation. Threatened species have a better chance of survival and entire eco-systems revive and become sustainable. Businesses who believe in sustainability, contributes to a triple bottom line, do so as more than an environmental gesture—it makes long-term economic sense.

Why is Planting Trees a Necessity?

Planting a tree is a good idea, but planting an indigenous tree as a component of a natural forest within a planned area, has the added benefit of creating a safe habitat for natural wildlife, supporting entire eco-systems, while giving clean air, protection, food and support to the smallest and biggest of living plants, insects, animals and humans.

Besides preserving ecosystems, trees provide numerous services vital to our communities which can be equated to Rands and cents. Sadly, these monetary benefits are often overlooked when evaluating the worth of urban “green” infrastructure.

Economic sense – “deforestation is rarely in the economic interest of the country concerned. More often it is due to a combination of bad policies, population growth and poverty. In some parts of the world, such as the highlands of Bolivia, Peru and Nepal, and in the countryside surrounding many fast-growing cities in Africa, trees are lost because the poor use wood for fuel.” THE ECONOMIST

The WPO South Africa has left a living legacy !

Maggie Baleta, owner of Klein River Cheese Farm and manager of the two reforest sites along the river on that farm, has something to tell you .

Dutch company Intereno, specialised in renovation of kitchens, plants a tree for every kitchen they renovate. They had this movie made about the forestation on Farm 215 to spread the message of their support for this green initiative 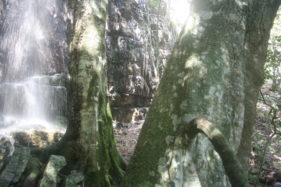 There is this common misconception that forests demand a lot of water and that in areas where droughts are experienced, the planting of trees should be avoided.

There is truth in that where the monoculture of invasive Australian Gum and Acacia and Mediterranean Pine trees are concerned, but the story is different in relation to pristine eco-forest systems indigenous to the Cape. Indigenous trees “drink” water as well of course, but they also provide water-related services to the land.

Pristine indigenous forests in the Cape are shady and multi-layered. They capture the Sun’s energy and –hence- cool the place down. Cape forests remain much cooler during the day-time than land covered with bush or sparse vegetation. This reduces evaporation from the soil.

Forests capture clouds, fog and other atmospheric moisture (of which at the coast, much originates from the ocean) and as such enhance water retention, which is one of the factors that contribute to rain.

But forests also contribute to water retention of the land. Tree roots do not only provide upward flow of water but also downward. The water captured by forest that is not immediately needed by the trees, are –as it were- injected deep into the soil. The roots of the trees infiltrate deep and wide into the soil and in this manner add to ground-water re-charge.

Especially in areas with seasonal rains, such as the Cape, this water retention capacity of forests slows down the amount of water flowing downstream during winter when water is plenty and –as such- contributing to water-flow after the rain-season, when the riverine and catchment areas need it more.

In one of the reforestation sides of the South African Reforestation Trust (The “WPO Plant a Forest Program” is part of this Trust), the stream did widen, meandered more and did flow slower after rehabilitation through reforestation resulting in increased water retention of the land and slower run-off to the ocean.

Indigenous forest-systems are intimately linked to rainfall and water availability.

And the above is not saying anything about the forest’s capacity to improve the quality of the water, to produce clean air and rich soil and store carbon, prevent erosion, desertification and floods, regulate the temperature of the earth and help maintain the Cape’s biodiversity. Not least of all, forests create a sanctuary for man.

Creating future forest eco-systems through the reforestation program of Trees for Tourism, is not only about trees.

Forest eco-systems provide essential shelter and food for a plethora of creatures of all kinds. Many animal and bird species depend on indigenous forest and woodland as their only viable habitat.

The further the –presently three- reforestation sites of Trees for Tourism mature and develop, the more wildlife it will attract, shelter and provide with food.

From inside the forest floor to the highest little branch in the canopy, each layer represents a habitat for different species of animals.

On the forest floor, snails make compost by feasting on organic matter and porcupines loosen the soil by digging for bulbs and roots. Bushbuck nibble on fresh new shoots of the undergrowth in the middle of a large concentration of insects .

In the understorey, bees nest in tree-hollows which in turn attract the honey badger aiming for the larvae of the bees. In the canopy, birds of all sorts eat the berries of trees, preyed upon by the “boomslang” and other snakes.

Baboons prefer indigenous forest for overnight shelter, though nightblind as they are still an easy prey for the leopard.

We are losing our forests in a rapid pace and the consequences are dire. As the World Resources Institute concludes : “Over the past 150 years deforestation has contributed to an estimated 30% of the atmospheric build-up of CO2. Deforestation is also a significant driving force behind the loss of genes, species and critical eco-systems.

Forests provide essential services for mankind. Forests produce clean air, pure water and rich soil. Forests prevent erosion, desertification and floods. Forests help to maintain earth’s biodiversity and to regulate the temperature of the earth. Not least of all, forests create a sanctuary for man.

The two 400 year old Cape hollies pictured here, have so far each created 25’000 kg of molecular oxygen and as such supplied one person with oxygen for her whole life. Since 1615 the roots of these Cape hollies have drawn up 20 million liters of water, which was released through evaporation and deposited as rain on the land.

Trees store carbon. A pristine forest eco-system however also stores substantial quantities of carbon in the forest floor: leaf litter, mulch and compost. Each and any tree in a healthy forest will be replaced by another when it dies and falls over, maintaining the average carbon storage capacity of the forest as a whole. That’s why it makes more sense to participate in reforestation than just to plant a tree somewhere.

And in South Africa, storing carbon we must. The CO2 emissions of South Africa are equal to those of the whole of the rest of the South African continent.

How much carbon will be stored by a certain forest, depends on numerous variables. But if a person plants roughly 350 reforestation-trees during her lifetime, she will have been a carbon-neutral member of her household. 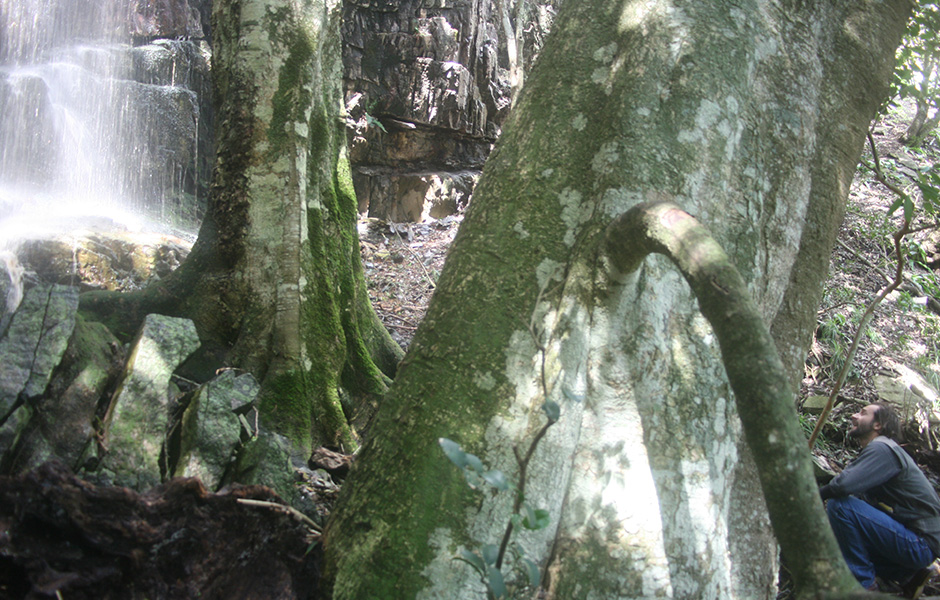 Farm 215 Private Nature Reserve in the Overberg has cleared and burnt the whole reforestation site from alien species before any planting of indigenous trees took place. Indigenous trees are planted out in close density so that the juvenile indigenous trees can shelter each other and to force upright growth.

All three sites are near water. Reflections Eco Reserve borders the Rondevlei Lake. The reforestation sites of Grootvadersbosch and Farm 215 flank streams running down from mountain catchment areas. Reforestation is a means to stream-bank rehabilitation, improving the water quality, preventing further erosion of the stream-banks and slowing down seasonal run-off of water. 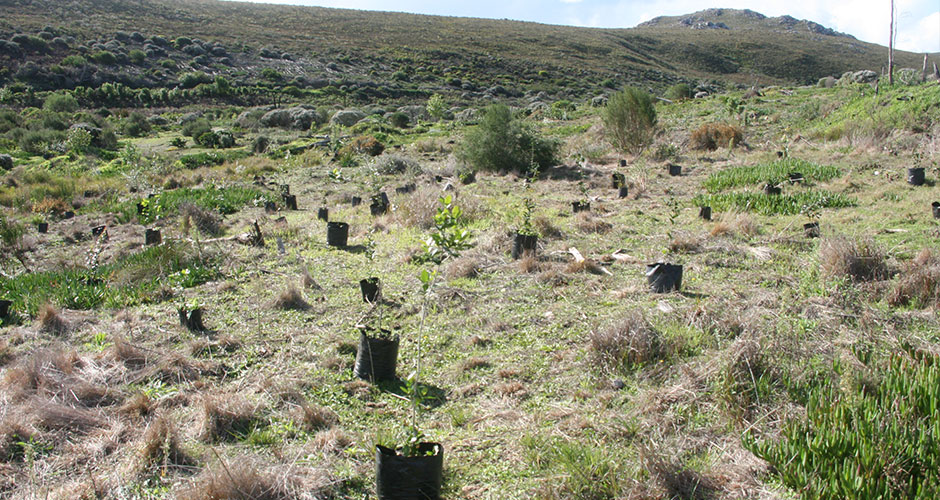 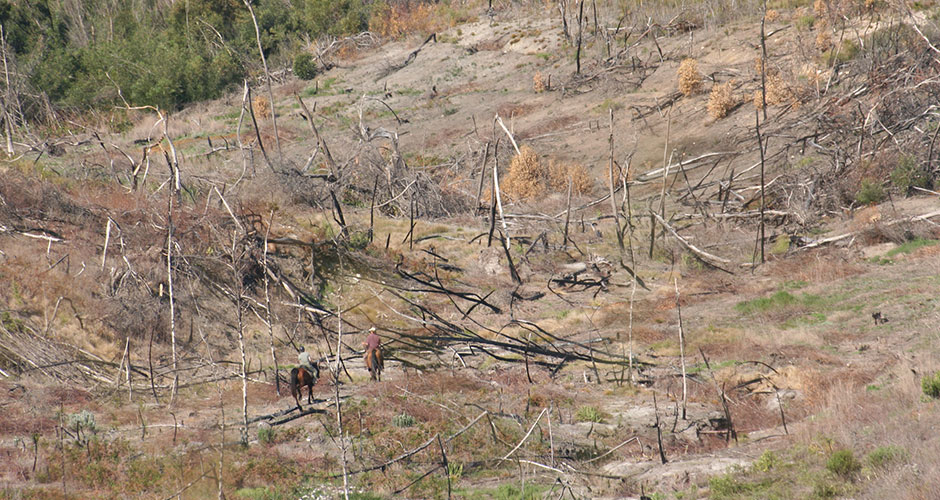 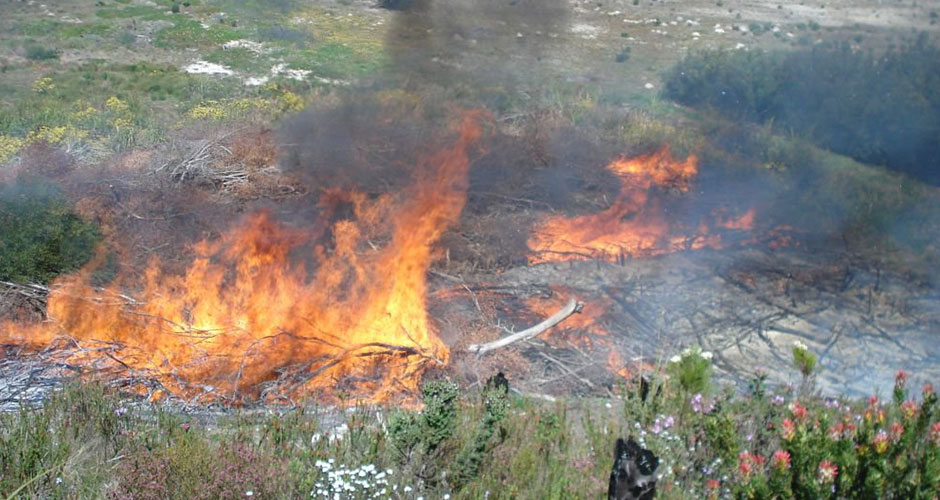 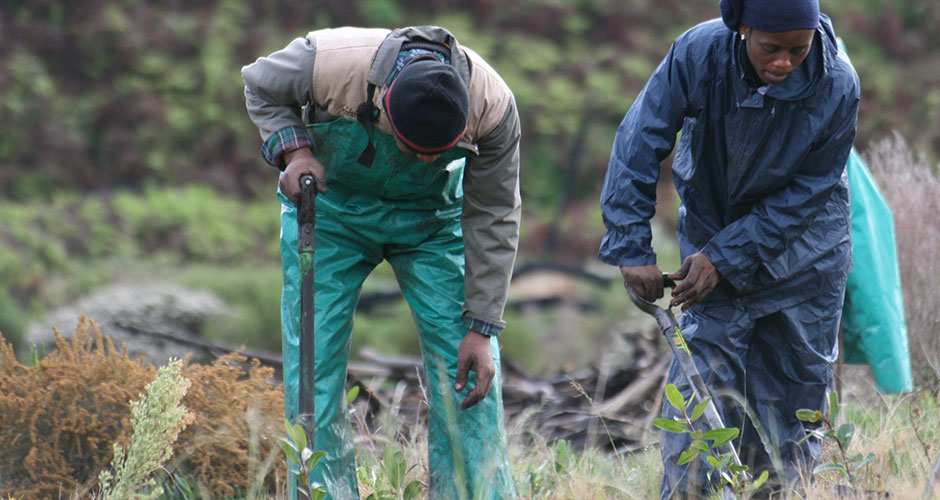